Do you struggle to manage your time and focus? Don’t worry, we all do occasionally. Time management strategies are essential for anyone looking to succeed in their chosen career.

As well as improving your work performance, effective time management will allow you to achieve a better work-life balance.

The strategies below will help will get more done in less time — our mission at Tameday is to help you work smarter, not harder.

The Pomodoro Technique was invented by Francesco Cirillo, an Italian engineer in the 1980s.

The technique uses a timer to break work down into intervals which help reduce the impact of interruptions.

Here’s how it works:

Taking regular breaks will help you to focus on the task at hand.

The strategy is very simple but powerful and one I use myself daily. All you need is a timer and a piece of paper to get started.

The Pareto Principle (also known as the 80/20 rule) suggests that 80% of results come from just 20% of your actions.

It is named after Vilfredo Pareto, an Italian economist and philosopher, who observed that 80% of the land in Italy was owned by just 20% of the population.

He investigated industries and found that 80% of production came from 20% of the companies.

Today, the 80/20 rule can be seen in various examples:

The 80/20 rule is one of the most helpful concepts for time management. By focusing on the most important tasks (often the most complex), you’ll gain tremendous rewards.

The Eisenhower Matrix was invented by Dwight D. Eisenhower, the 34th President of the United States.

Every day, he was required to make tough decisions about what he should focus on. To help him prioritise tasks he used an urgent-important matrix.

The Eisenhower Matrix is useful as it helps you free your mind by putting things on a to-do list and question if a task is worth doing.

You can use the Eisenhower Matrix to categorise your own to-dos into these four quadrants.

Tip: Try to limit yourself to a maximum of eight tasks per quadrant. 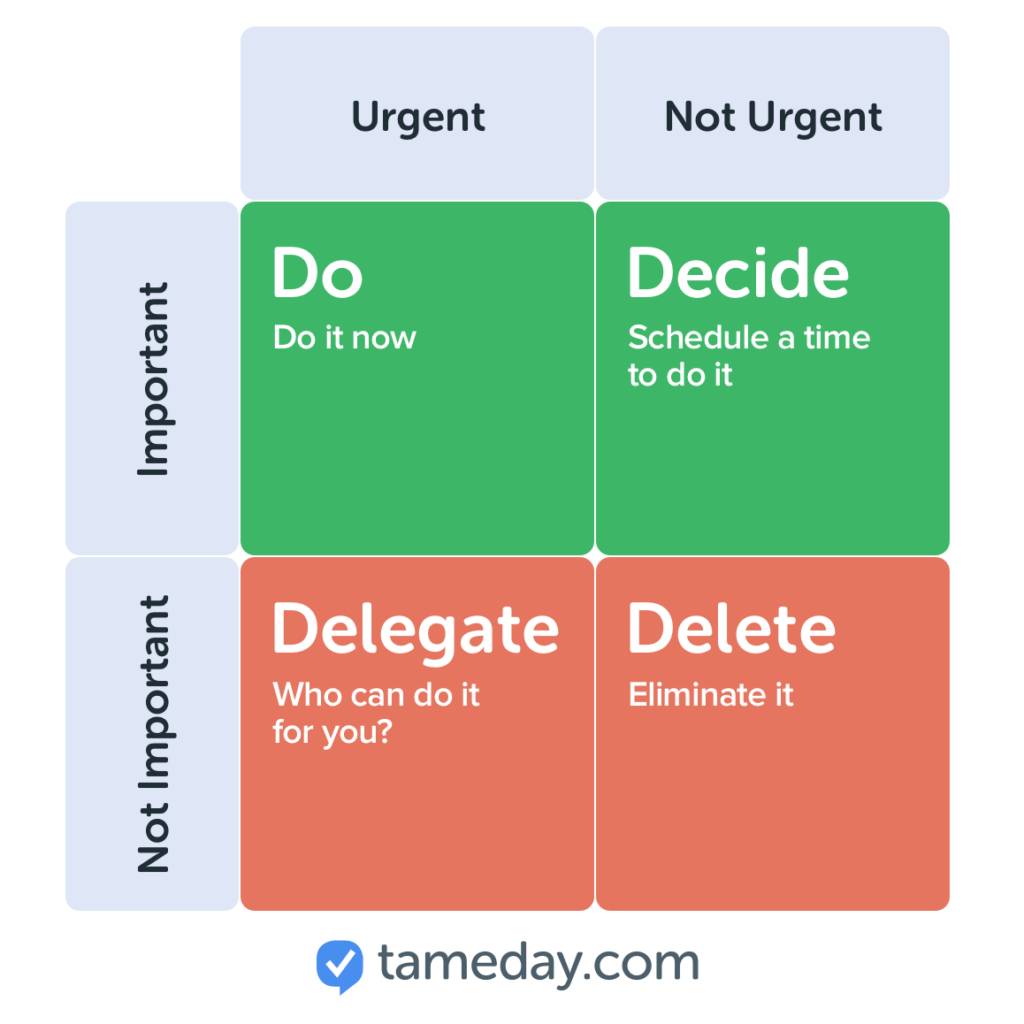 In 1981, Ivy Lee was paid the equivalent of $400,000 in today’s money by an American businessman for his time management strategy.

Here’s how it works:

The beauty of the Ivy Lee method is its simplicity.

When you arrive at the office the next day, you know exactly what you want to achieve — avoiding decision fatigue and saving valuable time and energy.

Eating the frog simply means doing your most important or uncomfortable task first.

It’s a task you’re likely to procrastinate on.

By tackling it first thing in the morning when your mind is fresh, you’ll feel a sense of accomplishment at the start of your day and the rest of your day will seem easier.

Entrepreneur Tim Ferriss recommends not checking emails or social media first thing in the morning — instead, focus your energy on eating the frog!

Parkinson’s Law observes that, “work expands so as to fill the time available for its completion”.

This statement is the opening line from an article in The Economist written by Cyril Northcote Parkinson, a famous British historian and author.

He used the example of a lady of leisure spending three hours to complete the task of posting a postcard which will take a busy person three minutes to do.

Parkinson’s Law states that by giving yourself extra time to do a task you can make the task appear more daunting than it is and cause yourself stress. By assigning the right amount of time, the task will be reduced in complexity.

To start doing something you need your activation energy to be greater than your resistance to the task. The 2-minute rule lowers resistance as we only think about the first two minutes of the task instead of the whole project.

So, there you have it—seven time management strategies to maximise your time and productivity. Give them a go and let us know in the comments which one works best for you.